Posted on September 3, 2012 by byrnesurfaces

Held on the 1st and 2nd of September at The National Trusts Ebworth Centre and conducted by myself. 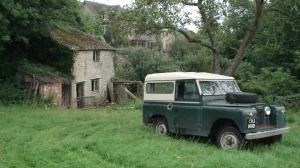 …….. and this is the site:  A derelict stone cottage circa 18th century.

The course was organised by the Cotswold Conservation Board and had 6 participants who worked hard to begin the careful and considered repair of the home sweet home of some long retired gardener.

My introduction covered the use of Lime Mortars in historic building construction – this was a beginners course spread over a weekend and so I kept it reasonably simple and so really only talked about the use of lime mortars in the repair of stone cottages.

The cottages in the Cotswolds, and in many other places are not actually built with lime mortar but with mud mortars or sometimes stonedust, or quarry mud, as I call it. I have also seen coal ash used especially with bricks.

The lime is reserved for the pointing, rendering, the limewash and the interior plastering, and even then the first coats of plaster were often mud.

However this was a lime course so I introduced the ubiquitous  Lime putty and I explained the Lime Cycle  :

Burn in a kiln

This strongly Reacting with water produces:

If this is allowed to dry slowly it absorbs:

And thus returns to:

Though not quite limestone almost, and therefore compatible with  stone, mud and wood.

Then we looked at sands. Sharp sands 3mm down to dust. Also crushed Cotswold stone (looks a bit like the sand but dustier and more absorbent) explaining that individual preferences amongst professionals accounts for some using sand and some using stone dust, also, of course sand is more readily available than stone dust to most people. We mixed both sand and stone dust together in roughly equal parts and mixed two and a half portions of sand with one part lime putty by volume.

One thing to remember – this is all approximate because sands vary in surface area and its the surface area that determines the amount of lime required to make a workable mortar. Also lime putty is partly water so again you may have to add more of your lime putty (for arguments sake) than my lime putty to get the same lime in there. As I say it’s approximate. what you are looking for is a nice to use workable mortar – nice and ‘plastic’ so it stays on the trowel but not so much lime that it has a tendency to crack as it dries. But if you are using lime putty too much lime is always always preferable to too little.

The Consistency of the mix is important in that it has to vary depending on whether one is pointing or plastering or roughcasting (Harling).

I mentioned NHL5 NHL3.5 and NHL2. These numbers refer to the hardness achieved at 28 days 5 being the hardest, however each brand, and there are many, differs from the rest and the criteria for being in one of the brackets is so broad its almost meaningless. However if you stick with NHL2 you should be fine and I favour St Astier and Singleton Birch who produce an NHL1

We used NHL2 mixed 2.5 sand to 1 lime and mixed that 1 to 1 with our lime putty plaster for pointing the front of the cottage.

As an aside to pointing the cottage we made up a lath panel so that we could see some lath and plaster and although it did not set during the weekend to allow it to be finished in any way we were able to see how the plaster squeezes through the laths. We used riven oak laths, of course they are not straight and so the spacing between the laths are not even, so the rivets of plaster are not even either. I think that sawn laths are better for ceilings because you get a much more even gap allowing the optimium amount of plaster to be used which, in turn, gives a lighter ceiling thereby negating the need for the stronger riven laths. Of course on external lath and plaster walls the oak is much better than the soft wood sawn laths.

I calculate that on average you need 9 laths per vertical foot or if you like 27 per vertical metre. so if you buy you laths 3 foot wide, which is normal, you will need about 27 laths per yard (or metre). you always need a few extra so assume 30 and you should be about right. And its my preference to staple them up with a Paslode stapler. 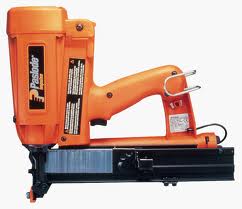 however on this occasion we nailed them on with galvanized clout nails.

There was a lot of missing stones and lost surfaces so as well as the pointing we undertook some tile repairs: filling the missing facing with miniature walls of stone roofing tiles cut to size and bedded in lime mortar – a standard procedure often used on historic fabric to denote repairs from original masonry but useful as a way of securely filling in awkward gaps where removing more of the ‘root’ of the stone would do more damage than good.

We had to replace some old stones in order to rebuild the wall under the window where there is a window seat and therefore a thin wall. The stones were bedded on mud mortar because all the other stones in the wall are themselves bedded on mud mortar and by bedding the new ones on similar stuff any subsequent movement will be even through the new and old masonry. It was pointed with lime as the rest of the wall was.

I demonstrated making up limewash with lime putty and water mixing it to a thin cream/thick milk consistency into which I sieved yellow ochre mixed with water and then  raw umber mixed with water to tone down the yellow. You shouldn’t add the pigment direct to the limewash as a powder as it wont mix in properly.

Quantities of pigment vary but the limewash dries a lot lighter than it is when it’s wet so you may need more than you think.

I also showed how to trowel round and square corners, always starting on the corner and trowelling away.

Though I did some demonstrations it was a practical course and all the hard working participants did a great job launching what I hope will be a successful series of practical workshops in this abandoned little 1up 1 down Cotswold cottage in a picturesque setting in the heart of the Cotswolds. 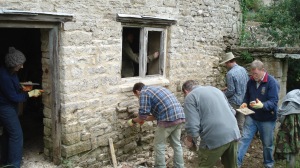