Posted on September 29, 2012 by byrnesurfaces

During the spring I began the creation of a Modern modelled render – not pargetting, but neither strictly sgraffito. In actual fact not modelled at all but carved into the surface of the KRend render (a pity it wasn’t lime render)  which had been applied by another contractor (sadly) It was applied to straw bales held within a modular cassette based superstructure forming the walls of a science block built for a girls School in Bath.

A complete tangential detour from the repair and conservation of old buildings and their lime surfaces which I am known for within the Cotswold area.

The design was visualised by architects, White Design of Bristol and built by Modcell

I was asked to devise the methodology and bring about the realisation. The plan was to depict a DNA double helix spiralling horizontally the full 7 metres x 45 metres of the front and side elevations.

The pattern itself was transferred from 20 architects drawings each showing about a 3.5 x 3.5 metre square section .

Due to the client requiring to see a trial section modelled onto the actual render we chose one of the more complex pieces which happened to be part way along the elevation – at this stage the client could still cancel the project so there was a possibility that the rejected trial would have to be re-rendered.

However on the strength of the test panel the scheme was accepted. Of course, we had not started in a logical place so the pattern had to spread out either side of our starting point. I wanted to draw the entire DNA before cutting but one section had been cut already so there was some trepidation as to weather the pattern would indeed connect together; whether the diagonal ribbons were at the exact angle for the crossing points to be in the correct places and so on. 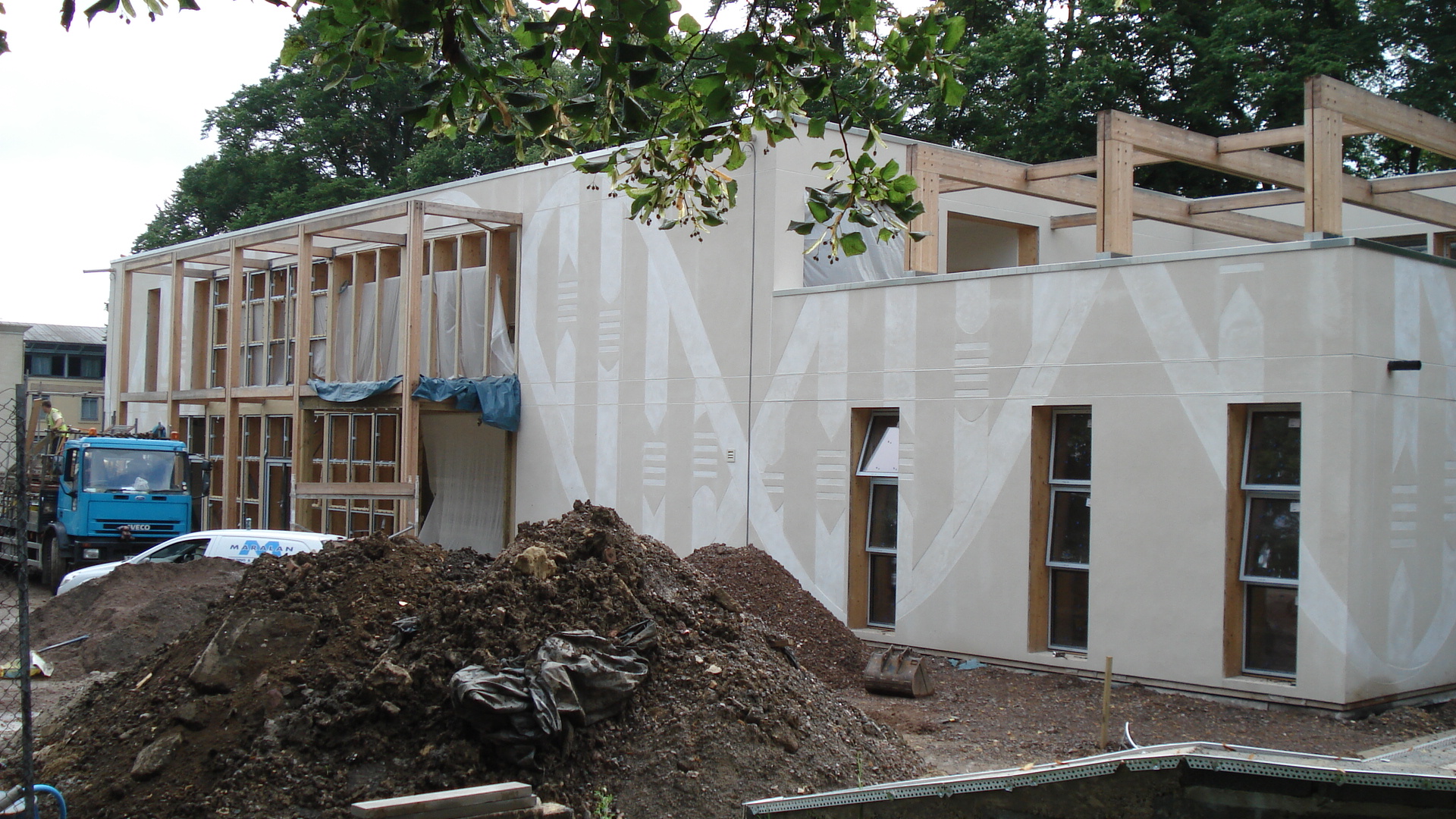 There was, however, no need to worry as our marking out had been accurate enough for the pattern to be continued and developed along the building without any adjustment or correction.

I had decided that the pattern needed to be carved in low relief as any applied pattern would be at risk of being knocked off the render if someone rubbed against it, also there are many areas within the render which would have tended to catch water. The pattern had to be shown as being 3 dimensional because the DNA twists around an axis and has a radius in this case of 3.5 metres and although the pattern does not accommodate any perspective it still needed to show the ribbons crossing each other. There was not much depth of render available but only a 1mm step between the 3 planes were required for the effective 3D depiction, thereby requiring a maximum depth of 4mm to be carved.

After marking out the pattern it was colour coded with chalk so we knew exactly the depths each part would be carved to.

Once colour coded, the pattern was carved with hand tools. When the whole scheme had been carved the cut surfaces were rendered smooth and the edges sharpened using a lime putty fine stuff. This finishing plaster created a smooth surface which contrasts with the open texture of the scoured render and thereby allows the pattern to be clearly seen.