Posted on January 7, 2022 by byrnesurfaces

Having spent time wondering what sort of trowels might have been used in antiquity, not having seen any in any of the many museums that I have been in, I simply reasoned that some might have been made from copper and so decided to make myself one or two to find out how they perform

They are made from 3mm copper sheet with apple wood handles.

Posted on November 21, 2021 by byrnesurfaces

I decided to build a shed from old pallets and I decided to render it with cob – earth, stones and straw – so it would be in keeping with our cottage.

The windows came from an old sash window I was given. The roof will be shingles.

To help fix the cob to the pallets I fixed bamboo canes vertically and rather than nails I tied them on with hemp rope. All very Japanese in influence and all good fun.

Eventually the cob will be covered with lime roughcast and limewashed white to match the cottage.

If the shed had been more planned and less an organic evolving project, there would be no screws or nails in the construction but as it is the pallets are screwed together, it was only after I had done that that I had the idea to tie the canes on, the original idea was to nail on laths but as I had a lot of canes in stock I went with them.

Of course, the rendering is easy – just wack on cob pancakes and press in. It is far too heavy for trowels. It makes my arms ache but it is a joy to work with.

Cob from Heritage Cob & Lime, Bideford. ( as were the pallets )

repairing cob and re-rendering with lime

Posted on November 19, 2020 by byrnesurfaces

This cottage had a cement render which was cracking. It turned out that it had been applied over thick to the cob without any attempt to anchor it to the dusty surface of the cob so that it was just peeling off.

Posted on November 18, 2020 by byrnesurfaces

For some reason felt floats are not widely used. They are difficult to find so I thought I would make my own.

I find it really useful for smoothing mortars with a high lime content. Being felt it grips the lime better than wood or foam floats which often slip over the surface more.

a little job with curves and corners

Posted on November 18, 2020 by byrnesurfaces
Posted in Uncategorized | Leave a comment

Posted on November 18, 2020 by byrnesurfaces

the difficulty with this ceiling was that the floor joists were so bent in the middle the new ceiling could not be made flat – the two alcoves governing the level of the ceiling edge. But by carefully compromising and balancing out the undulations the new ceiling looked perfect.

Occasionally an interesting job comes along; in this instance just a little limewash order but the colour had to match a rather bright green nylon fabric, the colour is close to a bright green apple. It was certainly not within the capabilities of my standard stock of pigments: yellow ochre, red oxide, raw umber, etc. I have green but it needed some very bright yellow so I ordered Yellow pigment coded name 4G from Rose of Jericho.  It wasn’t a yellow I have used before but I knew I needed the brightest most lemony yellow they had.

The pigment worked perfect as the picture shows.

The skill with matching colours is being able to sense what pigment you need to add to get nearer to what you want with the added obstacle of limewash drying a few shades lighter than the wet colour, a bit of red? more umber? a touch of yellow, maybe it needs some black.  This is not so much a problem when trying to match a wet sample of limewash although it is possible to get a very close match with a wet sample only for it not to match up with the original when both are dry. In this case it is only two pigments Green and bright yellow. I once saw recipe with 6 pigments in it which seemed excessive to me. I personally think three is enough. The classic Cotswold yellow is ochre is really only two: yellow ochre and raw umber.  Not Burnt umber which is too warm a colour.

renovation of our lounge

The walls were still lime plaster, some on masonry and some on lath but all were painted with purple emulsion. They were pitted, some of the top coat of plaster was peeling off and the walls had been chased for re-wiring so it obviously needed attention.

When we bought this house I realised I needed a pretty good plaster recipe, I was not going to be re-plastering everywhere because we are living in the house and removing old lime plaster is a dusty job. I also wanted to avoid the time and cost of complete re-plastering.

My plan was to skim over the walls with a thin coat of lime and then paint with clay paint, repairing what needed to be repaired, patching what needed patching but keeping as much as possible.

The breathing issue is not so relevant with lath and plaster stud walls but is relevant with masonry walls.  But what is important is a good key so I pecked all the walls or scratched them were pecking was a bit too disruptive for the lathing. Pecking or otherwise breaking through the emulsion coating to some degree allows the plaster to breath and with a good coat of lime over the top this is helped further. To aid further adhesion I gave the walls a coat of grip primer.

Once the walls had been prepared I needed a high performance plaster to work with. I devised my own recipe jblime finishingplaster 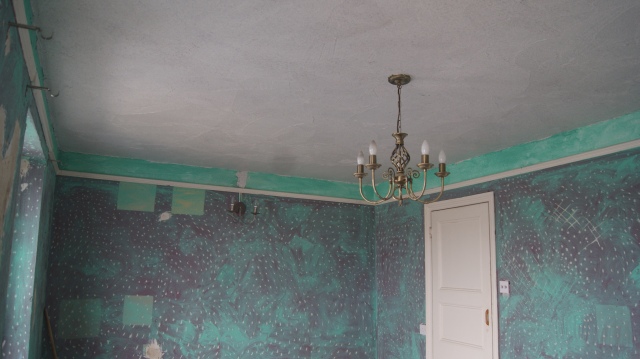 the walls pecked and primed ready to skim 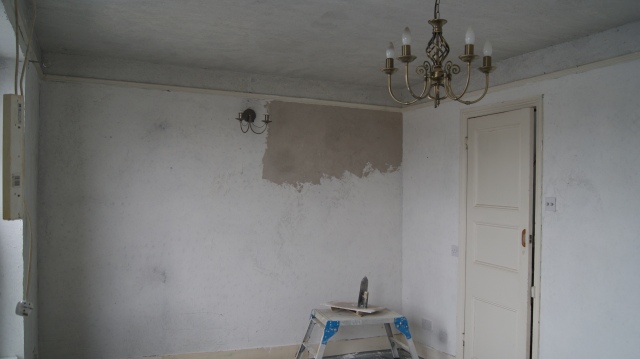 the beginnings of the final coat of plaster – tinted brown

When the first coat had dried off a bit it was time for the second, 3 parts lime putty to one part sharp fine sand and plenty fine manufactured fibres. I added some brown pigment to create a contrast between this coat and the first so that it was easy on the eyes seeing if I had missed any bits. 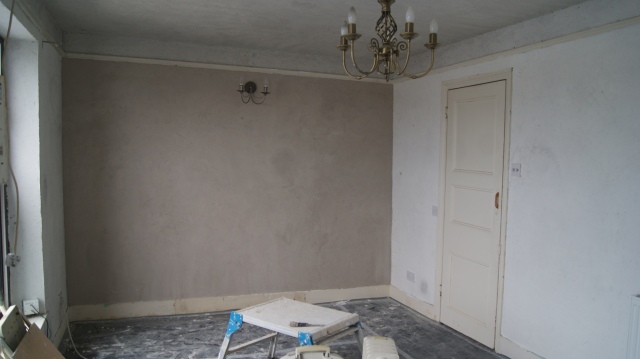 The next day I was able trowel the plaster flat and smooth, compressing it and tidying up the edges, it is time consuming but very important.

When it had dried, and being no more than 4mm thick, it didn’t take long the new plaster was painted with Earthborn clay paint. I bought white and tinted it with black pigment to get a light grey, I tend to tint all our paints in the house, one room was tinted with iron oxide I found oozing out of the sea cliffs west of Westward Ho! another room uses paint tinted with Bideford Black also got from the sea cliffs. This time I bought my pigment from heritage cob and lime  who supply my excellent lime putty and sand.

with the furniture in and ready for me to lounge in.Once it was painted and began to dry it was obvious were the damp was as those places were drying much more slowly, I knew they were damp anyway but it is always nice seeing the new plaster dry out after years of not being able to.

Any way thats another room done and now I only have the ground floor to tackle but that wont be until late spring 2018 so we will be living with crumbling plaster and wire chases for a while yet but at least we can watch telly in relative comfort and style.

Posted on April 5, 2017 by byrnesurfaces

This article by Gerard Lynch was published in 2007.

It’s been ten years and still the ready mixed lime mortar producers haven’t fully taken it on board.

The most enlightening statement for me is this:

“under analysis, the majority of historic lime mortars are not commonly found to be 1:3 but typically vary between 1:1½ and 1:2, just as the original mortar makers and craftsmen intended. This is borne out by extensive analysis carried out over many years by The Scottish Lime Centre Trust. (At the last count the organisation has analysed around 4,500 historic mortar samples, approximately 80 per cent of which were from Scotland, 10 per cent from England with the remaining 10 per cent from various other countries.) The average lime:sand ratio on the organisation’s entire database of historic mortar samples is around 1:1½.”

Stamped plaster work. Initial trials of stamping lime plaster with wooden blocks using an innovative plaster recipe. The plaster can be used as an ultra fine lime finishing plaster which can be applied 3-4mm thick and simply trowelled smooth but which can also be imprinted with quite detailed patterns.

the bigger block is 6 inches square.

This is a close up of the border of the bigger block showing the detail .