A summary of limewashing a house 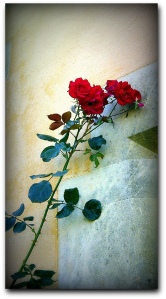 As with many render repair projects the main difficulty was the removal of the lichen and grime, unless this is done thoroughly then the limewash will not adhere satisfactorily, therefore the first task was to power wash the render and then wire brush and scrape off any remaining stubborn areas of lichen – even then some deep rooted patches of lichen still remained embedded in the open texture of the weathered troweled surface.

The render had been patched here and there with cement mortars of varying ages, the patches were in the usual places: gables, the dormer and above some windows;  places were the masonry had settled over the years or where the earlier lath and plaster had been replaced with cement on wire mesh or simply on to the existing old wooden laths. These areas of cement were removed and what lay beneath replaced or repaired.

Although it is easy to spot the cement patches that have to be removed it is less so when it comes to loose areas of the main render. It is not until the scaffold is up and the work has begun that the full extent of the re-rendering that will need to be carried out. In this case we lost about 12 square metres. The lime render was between 30 and 50% thicker than many renders that I have come across, and with no animal hair present as reinforcement it was unsurprising that some was lost.

The render appeared plane flat, but on closer inspection it could be seen that it had once been ruled out like ashlar and at a later date skimmed over thereby obliterating the ruled lines, there were a number of areas were this skimming coat had or did peel off. In addition to this loss of surface there were also hundreds of  nail holes and indeed nails – which when removed obviously left more holes.

After the cleaning of the render and removal of damaged or unwanted render the re- rendering began. The unexpected thickness of the render used quite a bit more material than usual and, of course, more time, but with plenty work still to do time could be made up.

(In these instances of over thick areas of render I always seek to take up some of the space, and save time, by using broken clay tiles or plant pots or even plain stone roofing tile offcuts to create a mosaic of ’tiling’ between coats. This creates a stronger coat of mortar – thicker than would be achievable with just plain mortar – whilst at the same time reducing the time required between coats.)

The important thing is to bring the new surfaces level and try to leave them as unobtrusive as possible, which can be quite an art when the surface all around has had a few decades to weather to its own unique texture and appearance.

Hydraulic lime was used for the binder, this time a Portuguese brand called Secil, rated NHL3.5. it was mixed at 2.5 parts sharp sand (3mm down) to 1 part lime. Our mortar was reinforced with horse hair although the strength of the lime probably negates the need for this. Still its good practice.

Between coats of render a coat of whitewash was applied on the remaining undamaged render, this has three benefits:

It highlights all the nails holes

It reveals any stubborn lichen remains

It results in an extra coat of limewash on the historic parts of the render.

(and it encourages a close inspection of the render as you go along with the brush, which in this case did indeed reveal further areas weakness.)

Going back to the render, laths were applied to the dormer window and verge rafters, however due to settlement and movement of both the roof and the gables there wasn’t actually room in some places for laths on the verge rafters and so mesh was used. Not metal lath, which I despise, but second hand nylon fishing net last used on a fishing boat in Scotland I think, its easy to cut and fit, is strong and is very compatible with the lime mortar.

Once the rendering was complete, the nail holes were filled, hundreds of them but all easily seen as black dots on a nice white background. Also now noticeable were the areas of missed lichen and grime that were already shedding the lime wash. Further wire brushing and scraping on these areas left them better prepared.

With the elevation now prepared for limewashing, we were able to proceed, a colour had been narrowed down to something in the pink category but quite what shade had not been decided  – in this situation the best way is to get some limewash on the building, stand back and evaluate it – at this stage, with four coats still to be applied, there is plenty opportunity to get the colour shade correct.

The white ‘undercoat’ makes it much easier to see were you have and haven’t painted, ensuring that the first two coats have been thoroughly applied over every single millimeter of render is important for the eventual result, it is almost inevitable that patches will get missed when the same colour is applied again. Which is why adjusting the colour is in itself a good thing, It is best to go a bit darker each time but if you have to go lighter a couple of coats will obliterate what has been rejected as long as the difference isn’t too great. It just means you might have to apply an extra coat.

Each of the four coats was applied with a brush after dampening the wall. The coats were allowed to dry for 24 hrs before the next coat.

The limewash used is an improved product using a reinforcing agent, this is still under research and development but in trials over three years has proved very beneficial to the end result.

With the colour and tone adjusted between coats a final colour was chosen and a large enough batch of wash was prepared to complete one coat. The coverage was in the region of 6 square metres per litre per coat.

The limewash was made from well  matured lime putty  – not hydraulic lime which I believe makes an inferior limewash as it settles out of the water and therefore requires constant stirring in the bucket.

My philosophy  during the project was to repair the render and rendered surface but not to attempt to restore it to any pristine condition but to produce a sound render, looking well maintained but with plenty signs of age.

conserver and repairer of historic surfaces
View all posts by byrnesurfaces →
This entry was posted in limewash, technical stuff. Bookmark the permalink.