Smooth and crisp and even.

There is this house and the owners had done a considerable amount of the work themselves, and very good it is too. However they did need some help with the plastering.

They had already got a first coat of hemplime on the walls and there was a host of other surfaces for us to plaster as well : woodwool board, Cork, Calsitherm sheets, bricks, stone ain addition to their first coat of hand applied hemplime.

Half the house is newly built so we wanted the limeplastering to be as regular as the multi finished walls.

I am afraid that the DIY applied hemp was not very flat and so I used string lines and screws to get us some flat screeds to work from. The walls came up lovely and level with derby floats and feather edges in much use. We let it all dry and then returned for phase two – the finish.

I might already have mentioned this but for my taste there is not enough lime in the commercially available finishing plaster so I bought a ton of it and several tubs of sieved lime putty. To 45 litres of finestuff as supplied I added 15 litres of lime putty and for my needs and technique that was ideal. The plaster is nice and sticky, spreads well and the suction is much reduced – yes! to reduce suction and increase spreadability add more lime not more water.

This plaster was applied about 5mm thick as flat and even as possible onto an already flat surface, the plaster was then floated with felt floats this gave a realy good finish for the final skim. The recipe for this I will keep secret for now because it is still in development but I will tell you it gave us a finish very similar to the modern stuff with very limited cracking, smooth to the touch and close grained with an eggshell type sheen to it.

The same plasters were used on all the surfaces with the occasional modification: for instance on the woodwool board ceiling I added loads of short horse hair to the finestuff, an idea taken from the Chalklime I had been using elsewhere, loads of hair mixed with  fine lime rich plaster – a joy to use, spreads beautifully and cracks not a jot*, two coats on the boards, hair in both coats, trowelled smooth and flat.

*Oh yes there are! After the heating was turned on an the house began to warm up the timbers began to shrink a bit so not just the woodwool board ceiling but the cork boarded stud wall too began to develop hairline cracks. It is being monitored and it is expected that the cracks will be dealt with at the time of decorating. 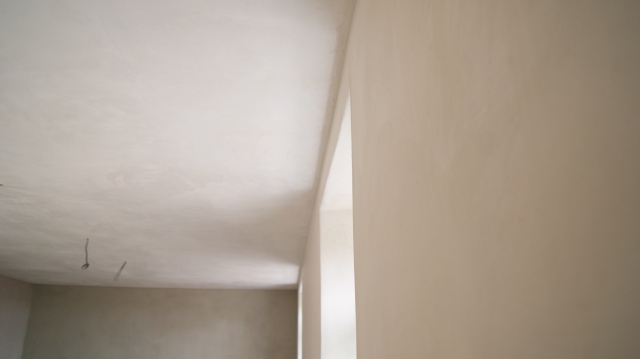 conserver and repairer of historic surfaces
View all posts by byrnesurfaces →
This entry was posted in Lime Plaster, Uncategorized. Bookmark the permalink.