Posted on January 5, 2011 by byrnesurfaces 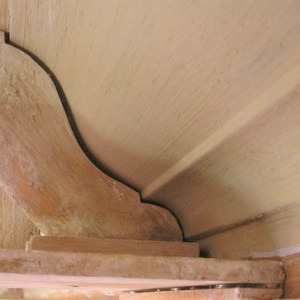 running a cornice in situe

This is in a National Trust property in Gloucestershire, UK. The building is a summer house and tends to be damp in the winter, for this reason I decided to fashion this cornice from lime plaster in situe rather than have a moulding made up in the workshop. It was felt that anything based on plaster of Paris would deteriorate in the damp conditions.  The final mix, seen here, was composed of lime putty, brick dust and sandstone dust. These three ingredients would act upon each other and create a strong plaster, with resistance to shrinkage during the drying and curing period.

The backing coat consisted of Lime putty, sharp course sand and lots of animal hair. This sticky mix was applied to wooden laths fixed between the ceiling and wall at 45 degrees. The lath cradle had the appearance of a railway track running around the room.

conserver and repairer of historic surfaces
View all posts by byrnesurfaces →
This entry was posted in Lime Plaster. Bookmark the permalink.