Posted on December 12, 2016 by byrnesurfaces 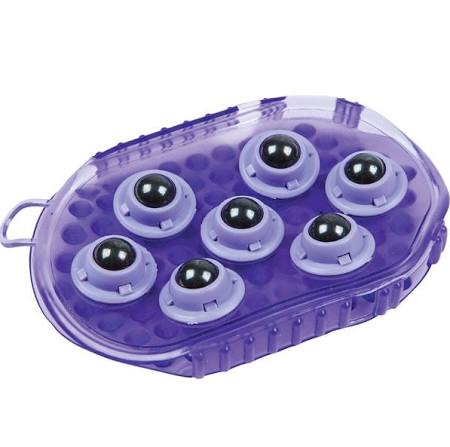 I found one of these in my local store, I think it’s for rubbing horses down. The balls rotate as you move it around.

now that my plaster is drying nicely ready for the top coat, but despite the quantity of (horse) hair I have put in it and due to the quantity of lime putty I have put in it, there is a little bit of cracking  – no much – just a teeny bit. But because I don’t want to smooth off the surface too much but do want to close up the small cracks I thought this would be worth a try.

they are only £4. The balls press against the plaster as you move it around the wall pressing in the plaster but leaving a nice compacted groove behind, it doesn’t gouge out the surface but it does compact without smoothing.

Of course, this doesn’t replace a float in that it won’t smooth off any lumps and bumps but it does compact as I say and for  four quid what’s to quibble about.

It comes as a mitt type thing but I couldn’t get my hand in it very easily so I am going to cut the back off and fix it to a plastic float, I might get two and fix both to the same float. they will fit ok so why not.

I have tried it out and it seemed pretty effective, but the thing is not to use it on soft plaster as it does gouge, the surface needs to be quite firm but still slightly pliable, which is about the time the cracking has stopped.

I must emphasise that there isn’t much of this cracking and it’s only due to shrinkage caused by the mix being 1 part lime putty to two parts sharp sand.  or to be more helpful: 3 parts putty, 6 parts sand, 1 part horse hair.

It’s funny how cracking has become such a bad word in plastering, look at any historic plaster and there are cracks all over, some are subsequent to it being plastered and probably down to movement in the building but some, and they are easy to spot when you know how, are cracks that were caused as the plaster dried and shrank. As long as the plaster has not actually pulled away from the wall as it can do with excess shrinkage, a little crack here and there is not a problem to worry overly about. Close up the cracks one way or another then when it has dried enough so no more cracking is likely, on with the JBLIME FINISHING PLASTER  and the jobs a goodun.

conserver and repairer of historic surfaces
View all posts by byrnesurfaces →
This entry was posted in Lime Plaster, technical stuff. Bookmark the permalink.